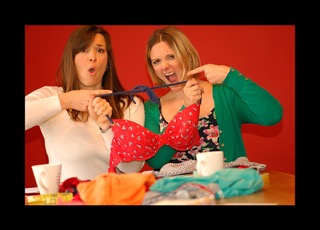 Tell us a bit about your family? When did you become a Mum and to whom?

Lucy: I became a mum to Millie in 2012. We waited a long time for her and I love being a mum as much as I thought I would!
Lerryn: My son Jamie rocketed into the world in 2013 and hasn’t stopped since! We call him the pocket rocket! He is super cute and I wouldn’t change being a mum for anything. Watching him discover his world is totally magical!

Lucy: JillyRox Ltd (you can probably work out why. Lets just say our kids are literally at the heart of everything we do!). The brand that people would associate with us most however is Halto.
Lerryn: We have more products to come that are currently in development so we needed an overarching brand to work from.

Can you describe it in one sentence?

When did you become a Mumpreneur and what inspired you?

Lucy: I guess at heart we have been entrepreneurial since we were kids, following in the wake of our mum. I remember setting up a table at the end of our driveway to sell things we had made; book marks, Fimo models etc. We even used to busk with questionable dance routines and singing! I’m sure it was hilarious to the passers by who would chuck us the odd 10p for our efforts. We would feel rich, and then spend it on penny sweets at the village shop!
Lerryn: Mum always had a business idea that she would be working on, and every time she took it right the way through to fruition. There was no procrastination at all! We grew up knowing no different and have always had underlying aspirations to do the same. We didn’t always plan to do something together; that was a happy accident really! We officially formed the company last September, although we had been working on Halto since 2012!

How did you fund your start up?

Lucy: We spent a lot of time exploring the options and in the end decided to crowd fund. It gave us a fantastic opportunity to test the market with a minimum viable product (an idea, an RRP and a CGI mock up for the product) before we committed to production.
Lerryn: We raised £10,000 in 18 days and walked away with a mailing list of over 200 people, a great level of brand awareness and a renewed confidence that what we were doing was the right thing. You don’t get that from a bank loan!

How do you manage working around your children?

Lucy: There is a great visual tool I was shown once with a jar full of pebbles and you were asked if it was full (the pebbles representing tasks in your day). After saying yes, you were then proved wrong by tipping smaller pebbles in that were shaken down into any gaps. And then proved wrong again when sand was poured in, and then finally when a jug of water was poured in. I guess this best explains how we run our business around the kids! We find time that would be otherwise wasted. You would be amazed at the conversations we have had whilst dealing with potty-training accidents or even via messenger whilst sleep training at 3am!
Lerryn: We walk and talk (beach, woods etc), we utilise free WIFI at soft play areas, we make calls and send emails when the kids are napping, we product test at trips out for the day, and we work late into the evening after the kids have gone to bed. It is probably more of a question of how we work around our husbands. They often get the bum deal!

Can you describe a typical day, what tasks do you have to get done, how do you manage your time?

Lucy: As a new start-up I am not sure if there is a ‘typical’ day, but you can always guarantee some things. Firstly someone will want to speak to you at an inappropriate time so you find ways to either rearrange or find a quiet space for a couple of minutes. We are lucky to have each other as business partners so can tag-team on childcare when needed. Then there are emails that come in, but modern technology means that urgent ones can be dealt with wherever you are!
Lerryn: I would say much of the way we manage to juggle at the moment is down to planning as much as we can. We work almost all evenings which enables us to catch up on emails, be proactive with PR and social media, and generally get some head space in order to plan ahead. Our days are flipped around really. Our working day starts properly at 7.30pm and finishes around 11.30pm, with some time during the day to deal with the more time-specific stuff. Because we are dealing with China and Australia as well as the UK, this working pattern isn’t always a bad thing!

What challenges have you faced in your business and how have you overcome them?

Lucy: I would say the biggest challenge (aside from the juggling time and the massive amounts of guilt we feel for being working mums), would be that the vast majority of business start-up and funding support we have received has been from men. Halto is most definitely NOT a male-focused product, and it solves a problem that men simply can’t understand. Being mums to two little ones was also a big issue in these situations. Consequently we found that we were being pushed back into ‘our box’ when it came to the market potential for the product and the perceived ability for us to take Halto to market. It was very frustrating and certainly tested our belief in ourselves.
Lerryn: We overcame these problems in two ways. Firstly, (and rather ingeniously!) we made a few sets of fake boobs-in-bikinis that any man attending a meeting with us HAD to wear for the first ten minutes. They weighed 7lbs (the average weight of 43DD boobs) and were placed around the unsuspecting advisor’s neck. They soon ‘got’ the problem! Secondly, we worked our socks off and made stuff happen. We have proved that we CAN do this, and do it really well. We now have an incredible team of champions around us (male and female) who believe wholeheartedly in the product and our ability to bring it to market.

What’s the best thing about being Mumpreneur?

Lucy: Oooh tough question. I guess on a selfish level, the means to scratch that itch that we have always had, but also enjoy the ‘feel good factor’ in the thought that we are being great role models to our kids.

What are your plans for the future?

Lucy: So, Halto swimwear is very much a phase one for us. We plan to launch it in Australia later this year, and then into other markets in 2017.
Lerryn: Then there are the exciting new products we are currently working on that will follow in Halto’s wake, so watch this space!
Lucy: In addition, we are one of only two female-owned businesses who have been invited to join the GAIN20 network, which offers some incredible opportunities for business development and networking. Who knows what doors that will unlock!
Lerryn: And, of course, we are not ruling out more children at some point!! Phew!

What advice would you give for someone just starting out in business?

Lucy: Know your target market and product/service REALLY well! Be very clear on what problem you are solving, how you know there is a problem, who has the problem and whether those people would pay to have a solution. There will be a lot of people who will challenge your ideas, but by having a really sound understanding these things, you are halfway there. Also, don’t be ashamed of admitting you got it wrong. It is far better to tweak your business model early on rather than plug on to save face.
Lerryn: Have a great support network around you. One of the best things we did was get an independent mentor who wasn’t emotionally involved in our day-to-day lives and could be really objective about the business. Their belief in us, and our business, acted as a buffer when we were running on empty, but their ability to play devils advocate was invaluable when thoroughly testing our ideas.

Is there anything else you’d like to tell us?

Lerryn: Yes, just a reminder really. Women are the most amazing creatures at building a community and supporting one another. We are also, unfortunately, the first to doubt ourselves and talk ourselves down. We pay too much attention to the annoying voice in our head rather than the guru in our guts. Just surround yourself with people who can keep you positive (and realistic), and just enjoy the ride!
Lucy: Don’t be afraid to be cheeky either. If you don’t ask you don’t get, and you end up being fairly memorable! We have had so much fun pushing the boundaries at meetings (from the fake boobs, to asking people to meet us at soft play centres) and have been surprised by how accommodating people can be. On that note, we are looking for some contacts at national online and high street retailers, so please get in touch if you could help us. Happy to reciprocate support in any way that would be useful! (See, it’s easy!)

We’d also like to say that Halto will be in the UK within 8 weeks and we are accepting pre-orders via our website www.halto.co.uk. If you understand the pain and discomfort of wearing halter neck bikinis, then a Halto should definitely be on your 2016 shopping list. Please spread the word! 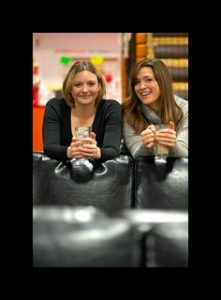