Tell us a bit about your family? When did you become a Mum and to whom?

I’m married to Mark, also self employed (a football coach). Shortly after we got married, we had Hugo, now almost 3. We also have Toby, 10 months. He was very unwell a couple of weeks after birth, needing life-saving emergency surgery, so he’s quite a little tough guy!

Can you describe it in one sentence?

Singing workshops that also use drama skills to communicate the message of each song.

When did you become a Mumpreneur and what inspired you?

Having a degree Drama and Musical Theatre, I initially worked overseas teaching and performing in various resorts. After returning to England, getting a full time job, settling down and having Hugo, I realised that I didn’t want to spend all week away from him, working to effectively pay someone else to spend all that time with him! I was nervous of turning down a guaranteed job to pursue my own work, but I knew this was a subject I was passionate about delivering, so hoped that the work would build up. I landed the role of Musical Director for a huge local community choir when Hugo was 5 months old, and the work grew from then on.

How did you fund your start up?

I really only needed basic equipment, licensing, insurance and room hire at first. All other costs are just ongoing expenses. I suppose my degree was my biggest expense! Luckily, I didn’t need to look into finance from anywhere else.

How do you manage working around your children?

I try to remember that this is all for them, ultimately. We are lucky that my parents babysit two evenings a week, when our schedules clash for half an hour. Other than that, it’s just a case of juggling things around each other.
It can be hard to try and focus on work when I’m on my own with both children, but in the long run I think it’s good for them to see that sometimes I have to get an important email sent, or find some sheet music. It has given them a little more independence, but I always explain what I’m about to do, and I set aside plenty of ‘no-screen time’ so they know they have my full attention.

Can you describe a typical day, what tasks do you have to get done, how do you manage your time?

Mornings are an energetic time, so around the park visits, food shopping or gymnastics classes, I usually just manage to catch up on some emails or plan a set list.
Hugo goes to preschool for 3 hours, 4 days a week. As I don’t drive, travelling does eat into that precious work window, but I generally go into work-machine-mode and power through plenty of song arrangement, private lesson planning and administration during that time (partly dictated by Toby’s needs, but he usually naps at the ideal time!)
Sometimes I have workshops to deliver in the daytime; I’m currently working on a regional BBC project. This calls for childcare, generally from fantastic friends and family, luckily.
After preschool, I often have the computer on and dip in and out of small work tasks while the boys play, we prepare dinner together, the boys have their bath and I gather my teaching materials to head out to teach. My parents arrive to watch the boys while I go, because Mark usually finishes after I begin.
When I return from work, I feed Toby and usually have many messages from students: the upside and downside to 24 hour social media! I’m usually buzzing and get on with planning things, but we try to catch up and maybe watch something together before bed. Toby is still up a few times in the night, at 10 months old, which isn’t fun!

What challenges have you faced in your business and how have you overcome them?

Although Toby was planned, I was worried that maternity leave would cost me many students. I returned to work when he was 5 weeks old, to keep on top of things. I also stepped down the pace whilst pregnant after I was admitted for a few nights in early labour, as the doctor told me to slow down.

The unofficial working hours can be extensive, and eat into social time: for example, the amount of concerts and charity bookings across all my singing groups in the festive period was quite extreme! The huge positive is that it’s work I love, and the Christmas events are sometimes suitable for the boys to attend with Mark, so I can see them in between performances and they can enjoy some Christmas music.

What’s the best thing about being Mumpreneur?

Getting to have such a great relationship with the boys. I have mum friends who work full time and still have a fab connection with their children; I also have mum friends who don’t work, and have so much fun with their children. However, it was important for me to have a balance between raising the boys and working. Partly because it demonstrates the importance of focus and hard work to them, but also because I needed an outlet for that side of my personality and I wanted to use my skill set.

What are your plans for the future?

As the boys enter the education system, I will increase my teaching hours, as I have a waiting list for private lessons. I’m also waiting to launch ‘Wrap Stars’, a babywearing adult choir. The idea is that, instead of just singing nursery rhymes together (which are beneficial, of course!), it’s essentially an adult choir singing modern music that they enjoy, whilst wearing (or just bringing along) their child. The benefits of being involved with music from a young age are so extensive, and I genuinely believe that Hugo’s huge vocabulary and grasp of linguistics is due in part to exposure to so much music throughout his young life.

What advice would you give for someone just starting out in business?

Make sure you’re really passionate about the business you’re going to commit to. Don’t add up the hours you really work, trying to work out your hourly wage! It’ll be a bit devastating, particularly at the start. Also, pace yourself. It’s better to take on 2 jobs that you’ll do well than to stretch yourself thinly between many projects and damage your reputation by under-delivering. 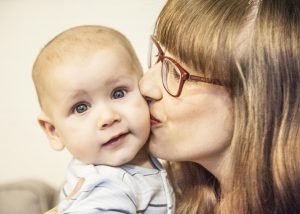